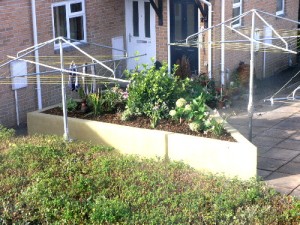 Today marks the 2nd Anniversary of “Bennett’s Folly”, pictured above, when building work began on this white elephant and fraudulent construction by the corrupt Charity Sanctuary Housing, which I named “Bennett’s Folly” around that time.

The above picture shows the various stages which led to “Bennett’s Folly”.

The reason this ‘V’ shaped area of land in the flats communal work area was transformed into a low growing Shrub Bed in 2010 was to stop the 2 rotary driers seen in the pictures being interfered with by foliage. That the residents were unhappy to continue paying a weekly Service Charge for rotary driers which were not ‘fit for purpose’ and voted to stop it ever happening again.

The above shows photos being taken on 17 May 2013 in preparation for “Bennett’s Folly”. The one with his back to the camera is Sanctuary Housing Officer Robert ‘Not to be Trusted’ Carnon.

A group of “rocket scientists” on 25 October 2013 considering the work to be done. The one wearing glasses was from ‘Evergreen Landscapes’ and was one of the men who later carried out the work. Unbelievably none of the above considered the design or construction would interfere with the nearby rotary driers, and the decision by the residents 2 years earlier was completely ignored and treated with contempt.

4 November 2013 – Work begins on “Bennett’s Folly”. It must have been bloody annoying with those rotary driers being so close.

10 November 2013 – The completed white elephant of a construction which served only to obstruct the residents using the nearby rotary driers which they paid to use.

To fathom out why Sanctuary Housing built “Bennett’s Folly”, which everyone involved must have known would interfere with the rotary driers, and therefore steal from the residents every week, one has to go back to 2009.

Throughout 2009 Sanctuary neglected grounds maintenance despite being paid weekly Service Charge payments. All 6 rotary driers had to be replaced and Sanctuary resorted to criminality to cover-up this fraud and deception upon it’s residents.

I lodged a number of official complaints which were blocked indefinitely by Sanctuary in 2010 to force me into external mediation. External mediation by TPAS for it’s flagship Accredited Landlord Sanctuary Housing proved only to be an unlawful SCAM to bury the complaints. A process conducted covertly in a cafe without the proprietor’s permission or my consent. 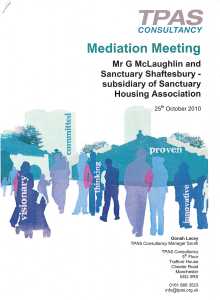 The TPAS Mediation Report which proved to be Null & Void.

I was offered a bribe of £220 to be party to the SCAM and which Sanctuary’s Simon Clark increased to £300 in late 2011. In declining Clark’s bribe and his advice to lodge my complaint with the Housing Ombudsman, knowing the HO could not investigate the SCAM, Simon Clark then closed my 800+ day old complaint unresolved despite acknowledging that mediation was a mistake.

In 2012 I was arrested by Devon & Cornwall Police following a complaint by ex-TPAS mediator Oonah Lacey who had been sacked by TPAS for alleged fraud in 2011. The police had no grounds or evidence to arrest or detain me and my arrest proved to be a SCAM arranged by Cornwall Council. That it had asked Devon & Cornwall Police to arrest and intimidate me enough for me to remove blogs from my website which were damaging to the Council, Sanctuary and others, but not risk charging me.

I was processed as a criminal and locked up and I was instructed that if I agreed to return home and remove the blogs I would receive a caution only, as opposed to my computer being seized as evidence knowing it would prevent me earning a living if I was charged.

The moment I elected to have a solicitor present and opt for recorded interview instead of giving way to intimidation Devon & Cornwall Police was in trouble. Apart from Oonah Lacey’s uninvestigated complaint of written lies, and the officers reliance upon a VPS statement which the solicitor considered “inappropriate” outside of a court of law and “oppressive” because the 2 officers continued to use it, the 2 officers had nothing else to offer in the way of evidence against me.

Despite my eagerness to be charged and have my day in court, and despite my solicitors advice that I had given the police no choice but to charge me, I was in fact given only a caution.

Over a year later the IPCC ruled all 4 Officers were at fault in some way and they were all given ‘Management Action’ only. This because the IPCC, like Sgt 3097 Dave Cartwright, also willfuly chose not to investigate more serious allegations and evidence.

So what has any of this to do with “Bennett’s Folly” I hear you ask.

Unlike Sanctuary Housing, which is above the law and answerable to no one, Cornwall Council is not. I believe the reason why “Bennett’s Folly” was built, and why there are so many unresolved grounds maintenance and repair issues where I live is to distract my attention away from Cornwall Council, Sanctuary’s housing partner, and in particular damaging blogs relating to 2011 which involved them both in some pretty underhanded and criminal acts. These involving myself being harassed for nearly a year as a direct result of Homechoice properties being unlawfully ‘ringfenced’ and the public being deceived.

Bennett’s Shame : Flat damage reported over 5 years ago but which remains in disrepair despite charity funds being spent on the nearby white elephant of a construction.

If you, the reader, think me wrong about “Bennett’s Folly” I would welcome your thoughts as to why you think it was built and for what purpose bearing in mind it serves only to steal revenue from residents and tax payers.

When I open my bedroom curtains every morning the first thing I see is “Bennett’s Folly” which Sanctuary is quite happy for me to continue seeing and complain about if the end result is it’s corrupt housing partner Cornwall Council is left alone.

In the 2 years “Bennett’s Folly” has remained to cheat the residents Sanctuary MD Simon Clark and CEO David Bennett CBE have been reminded every week in writing. Evidence which will I hope will eventually be used against them in a court of law.

Cornwall Council has long been aware “Bennett’s Folly” has continued to steal revenue from the residents and then Lib-Dem MP Stephen Gilbert turned a blind eye to this weekly fraud. Having dealt with Steve Double MP I predict he too will turn a blind eye to this fraud.

I am presently revisiting and researching 2011 – 12 with a view of writing something more substantial and longer lasting about that period.