It has to said, embarrassing Sanctuary Housing is not a very difficult thing to do. Every tenant and observer will know that this is largely due to the fact that Sanctuary Housing is so bloody arrogant, uncaring and unjustly protected by a flawed system and a complicit government.

What is truly frustrating for me personally is reporting failures and fraud by my landlord Sanctuary Housing to my local authority Cornwall Council only to discover the Council will not investigate or prosecute Sanctuary Housing because the Council itself is party to and benefits from criminality by its housing partner.

This is further frustrated by Ombudsmen and other so called ‘public advocates’ who do not have the jurisdiction to investigate complaints involving organisations other than the one being complained about.

Cornwall Council also recommended I contact the Local Government Ombudsman (LGO) knowing the LGO would decide in the Council’s favour because the LGO could not investigate Sanctuary Housing’s role/collusion with Cornwall Council.

To protect Sanctuary Housing in 2012, 4 Officers ended up being reprimanded by the IPCC and which involved a white-wash and cover-ups by both the force Professional Standards Department (PSD) and the IPCC itself.

My official complaints lodged in 2016 against Devon & Cornwall Police and Chief Constable Shaun Sawyer remain in limbo due to the fact neither D&C Police, the OPCC or the IPCC can investigate the complaints. This due to a number of Conflicts of Interest that exists involving D&C Police, the IPCC, the Office of the Police and Crime Commissioner, former and current, Chief Constable Shaun Sawyer and others, and which amounts to them breaking the law, abusing my human rights and conspiring to pervert the course of justice.

I am not suggesting all police forces are corrupt or that the relationships between Councils and their various partners to be criminal. It certainly does not help when Councils pay the wages of the Police, Chief Constables and the Police and Crime Commissioners and which is a serious conflict of interest and open to abuse.

So why bother complaining about Sanctuary Housing when it is truly above the law.

As frustrating as it is I will personally continue to complain about Sanctuary Housing, and others, because it then is a matter of record on the internet of what they are doing or failing to do. The alternative, perhaps even more frustrating, is to do nothing and let the bastards get away with it.

A Case In Point (additional reading as an example)

I have frequently reported the neglect of rotary driers in our communal area by Sanctuary Housing and most readers will probably think that it is hardly the crime of the century or worth reporting.

The truth is since this ongoing problem was first reported by me to Sanctuary Housing in 2009, when all the driers then had to be replaced due to Sanctuary’s neglect and fraudulent profiteering, the problems have continued to this day.

Sanctuary Housing is required to maintain and ensure all 6 driers are fit for purpose. This because we pay a weekly Service Charge for the use of all 6. The picture below, taken recently, shows one of the driers with obvious problems. 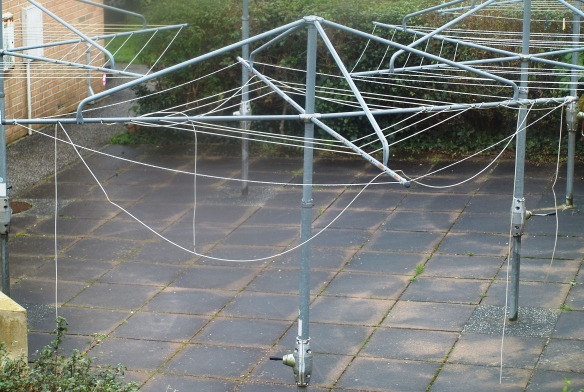 When first reported in August 2016 I pointed out that “The reason why it is always the same 2 rotary driers in need of repair is because all the others, which we also pay to use and have maintained, are all interfered with by foliage as Sanctuary is well aware.”, unquote.

A fact Sanctuary has been aware of since 2009 and which amounts to criminal fraud running into tens of thousands of pounds.

So there you have it. A record on social media and the internet by way of free speech reporting criminality by Sanctuary Housing’s Group Members and involving willful blindness by Cornwall Council, MPs, Councillors and others who are all responsible for representing us and protecting us from criminal monsters like Sanctuary Housing.